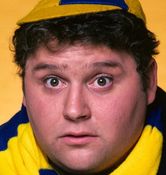 Stephen Furst performed in, directed and produced many movies and television shows, but he is best remembered for his first movie role in 1978 as the lovable, insecure and massively obese "Flounder" in the 1978 hit movie, National Lampoon’s Animal House.  When Flounder pledges the Delta Tau Chi fraternity, the members are so disgusted that they throw beer cans at his application picture.  John Belushi plays Bluto Blutarsky, who alternately makes fun of Flounder and feels sorry for him.  The fraternity members consistently break college rules and are so out-of-control that the college wants to close down the fraternity.
After his success in Animal House, Furst was sought after for comic roles based on his size and his ability to portray insecurity: the spinoff television series Delta House and movies such as Take Down, where he played a high school tuba player who was forced to join the wrestling team, and The Little Mermaid II, where he was the voice of the walrus, Dash.   He died at age 63 on June 17, 2017 from heart failure caused by diabetes brought on by the obesity that had made him famous.
A Life with Diabetes
Furst was born on May 8, 1954, in Norfolk, VA.  Both of his parents had diabetes and Furst was overweight throughout his early years.  He wanted to act and got his first part in high school where he played the Cowardly Lion in The Wizard of Oz.  When he was 17, his father died from complications of diabetes, and shortly after that Furst was diagnosed with Type II diabetes.  His doctor told him that he needed to lose a lot of weight, but Furst didn't take his condition seriously enough to change his diet.  He was 5'10" and weighed 285 pounds.
He went to Virginia Commonwealth University, starred in plays with his future wife, Lorraine Wright, and after they were graduated, they married and moved to Los Angeles.  To support himself while he sought acting roles, he worked as a pizza delivery driver and placed a picture of his face on his pizza boxes.   The pizza-box gimmick caught the attention of director Matty Simmons, who asked him to audition for the role of Flounder in Animal House.  A few years later his mother also died of diabetes, but that still didn't motivate him to lose weight because he had become famous as an insecure, overweight character actor and he knew that was his main attraction for future roles.
At age 40, he stepped on a piece of glass and developed an infection that climbed up his leg and his doctors told him that they might have to amputate his leg to save his life.  At that time, he weighed 320 pounds and was taking regular insulin injections. While he was still in the hospital, his doctors tried to help control his diabetes by placing him on a calorie-restricted diet, but that wasn't enough for him, so he called a take-out restaurant to deliver Chinese food to him.  The hospital put him on lock down, confiscated his food and forced him to lose 12 pounds during the five-day hospital stay. He finally got the message and eventually dropped his weight down to 175 pounds.   He became a spokesperson for the American Diabetes Association and the American Heart Association.
How Diabetes Damages the Heart
More than 60 percent of diabetics will suffer serious heart disease, which is their leading cause of death.  High blood sugar levels turn on your immunity which can punch holes in the linings of arteries. These holes bleed and clot and then plaques form over the clots.  A heart attack is not caused by narrowed arteries; it happens when a plaque breaks off from the artery, followed by more bleeding and clotting.  If the clots extend to completely block all blood flow through that artery, the part of the heart muscle served by that artery dies.   Heart muscle can live without oxygen for only about an hour and a half.  If the flow of blood is not restored in that time, heart muscle dies and is replaced by scar tissue that cannot contract and push blood through the body.  The heart can then beat irregularly or become so weak that it cannot push enough blood to meet the body's needs.  The brain can live for only about three minutes without blood flow, so three minutes after the heart stops pushing blood to the brain, the brain can die, the person stops breathing and the person dies.  Most diabetics die from congestive heart failure, which means that so much of their heart muscle has died that the heart becomes too weak to pump blood efficiently to the brain.
Diabetes Causes Damage Throughout the Body
Diabetes also damaged Furst's nerves leading to his eyes and other parts of his body. He had serious eye problems and had terrible burning in his feet.  When blood sugar levels rise too high, sugar can stick to the outer membranes of cells anywhere in your body.  Once stuck on a cell, sugar can never get off. It is converted by a series of chemical reactions to sorbitol that destroys the cell.
How Obesity Causes Diabetes
After you eat, blood sugar levels rise. To prevent blood sugar from rising too high, your pancreas releases insulin that drives sugar from the bloodstream into your liver.  However, if your liver is full of fat, your liver cannot accept the sugar and blood sugar levels rise even higher to cause diabetes.  To prevent or treat diabetes:
• Avoid overweight
• Severely restrict sugar added foods and drinks including fruit juices, fried foods, red meats and processed meats
• Non-diabetics should eat lots of fruits, vegetables and nuts. Once you have been diagnosed as a diabetic,  follow your doctor's guidance on the use of fruits.
• Try to exercise every day
• Keep blood levels of hydroxy vitamin D above 20 ng/ml.
Stephen Furst
May 8, 1954-June, 17, 2017