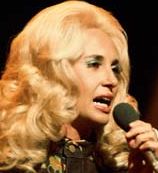 Tammy Wynette rose from poverty in rural Mississippi to become one of the most famous female country music singers.  She sold more than 30 million records, had 57 Top-40 country hits between 1967 and 1988, won two Grammy Awards, three Country Music Association awards, eight Billboard awards and 16 BMI songwriter awards.  In 2003, five years after her death, her "Stand by Your Man" was voted  the top country song of all time. However, her incredible success as a singer was marked by severe intestinal problems, multiple surgeries, depression and addiction to narcotic pain killers.  She married five times and her hit songs often described loneliness, divorce, sadness and  pain.
Early Years
She was born in a small town in Mississippi to cotton-farming parents.  Her father, who was very musical and played a guitar as a hobby, died of a brain tumor when she was nine months old.  Her mother sent her to live with her grandparents in a house that had no indoor plumbing or electricity, and she was sent into the fields to pick cotton.   At age nine, she taught herself how to play simple melodies on her father's guitar.  She sang gospel music at her local church and joined another church just to be able to sing more.   She was a very aggressive and hard-working child.  Through grit and determination she became an all-star basketball player in high school and got a chance to sing on a local radio station.

She Outworked Everyone Else
A month before she was to be graduated from high school, she married an often-unemployed construction worker.  They moved from one rental place to another and she worked as a waitress, barmaid and even as a shoemaker in a shoe factory.  At age 21, she became a licensed hairdresser.  In spite of her incredible success later as a country singer, she never forgot her early life in poverty and continued to renew her cosmetology license yearly for the rest of her life.  She worked days fixing women's hair and tried to get jobs singing in clubs at night.  With two children and pregnant with a third daughter, she left her husband because he would not support her singing ambitions.  At age 23 she sang in her first television show, which was followed by an appearance with Porter Wagoner.  She moved with her three daughters to Nashville, changed her name from Virginia to Tammy and got her first recording contract.  By age 27 she had climbed out of poverty as an established singer and had recorded five top songs: including "Stand by Your Man" and "D-I-V-O-R-C-E". That year and for the next two years, she was named the Country Music Association's "Female Vocalist of the Year".
More Marriages
After her unhappy first marriage, she married singer-songwriter Don Chapel and they divorced one year later.   At age 27 she sang a duet with her childhood idol, George Jones, and she was instantly smitten with him even though he was 11 years older.  They married and had a daughter, Tamala Georgette, who grew up to be a successful country music singer.  The couple recorded several duets including "We're Gonna Hold On," "Golden Ring," and "We're Not the Jet Set."  However, he drank too much and disappeared for long periods, and they both stated publicly that they argued all the time.  In 1974, after five years of marriage, they separated and the newspapers reported that the woman who wrote "Stand by Your Man" was getting a "D-I-V-O-R-C-E."
She rebounded from an affair with actor Burt Reynolds and married a real-estate broker, Michael Tomlin, but that marriage lasted only 44 days.  At age 36 she married singer-songwriter George Richey who also managed her career and businesses.  They remained married until her death.
Multiple Health Problems and Death
In 1970 at age 28,  after having her fourth child, Wynette had her uterus removed.  A resulting infection caused terrible scarring and she suffered painful intestinal symptoms for the rest of her life. That same year she developed an obstruction in her bile ducts that damaged her gall bladder and after that, she suffered chronic and recurrent intestinal obstructions and infections. She also had surgeries on her kidney and had nodules removed from her vocal cords. She tried to control sometimes overwhelming abdominal pain by taking narcotic pain medications. The addiction caused terrible depression and she was treated with electric shock therapy. During tours, she could not perform without narcotics and often needed a backup singer to sing most of her parts.  In 1986, at age 44, she entered the Betty Ford Center to be treated for her addiction.  In 1993, at age 51, she lay in a hospital bed for five days in a coma caused by a bile duct infection spreading through her body.
At age 55, after more than 30 operations, almost 30 years of severe intestinal symptoms and taking addicting pain medications, she died while sleeping on her couch when a clot formed in her lungs to block the flow of blood through her heart.
Her Adult Life of Pain
After Wynette had surgery to remove her uterus at age 28, she never was well again. The surgery itself or an infection following surgery could have caused the damage to her gall bladder.  She had terrible belly pain that no surgery or other treatment could cure. The pain was so severe that she spent the rest of her life taking narcotics in an effort to control her misery and allow her to function. I have not seen her medical records, but I can explain the life-long misery and pain that can follow gall bladder surgery. 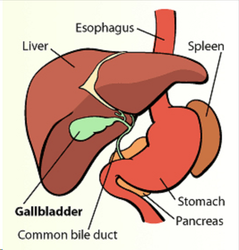 What Is Your Gall Bladder?
Your liver removes old blood cells and breakdown products of metabolism and concentrates them into a green-yellow fluid called bile.  Bile travels from your liver to be stored in a balloon called your gall bladder.  When food enters your stomach, your gall bladder squeezes bile from the balloon along tubes called the cystic duct and common bile duct into your intestines.  Bile works to break fats down into smaller particles that can be absorbed into your bloodstream.
Gall Bladder Problems and Symptoms
Bile usually causes no problems in your intestines, but if bile ever backs up to get into your stomach, and then backs up to your esophagus, it can cause severe burning and paralyzing chest and belly pain.  To prevent bile from refluxing back up to your stomach, a large pyloric sphincter muscle is located at the end of your stomach.  This is supposed to keep bile from backing up from your intestines into your stomach. Bile reflux can be caused by surgical complications that damage the pyloric sphincter, removing the gall bladder or any type of gall bladder surgery, or gastric bypass surgery.
Cholecystitis means that the inner linings of your gall bladder are raw and swollen because the ducts that carry bile from your liver to your intestines are blocked by scarring from surgery, infection or bile stones.  The obstruction can build up so much pressure that the extra bile can rupture the tubes to cause a surgical emergency.
Symptoms of gall bladder disease include:
• Right upper belly pain radiating to the right shoulder in front and shoulder blade in back.  Initially the pain comes and goes and eventually you feel pain all the time.
• Nausea, vomiting and fever that can come and go.
• In 15 percent of patients, there is a yellow color in the eyes that indicates jaundice.
Lessons from Tammy Wynette's Painful Life and Death
• Childhood poverty and deprivation can drive some people to work very hard and achieve great success. Yet no amount of financial gain, fame or adulation erases those painful memories.
• Wynette spent her entire life working harder than everyone else to be the very best in her field, but her success and fame could not protect her from an unhappy life, multiple divorces and estrangements, and a very young death.
• Her addiction to narcotics can be explained by the pain and misery she was trying to control.  Her uncurable gall bladder disease overwhelmed everything else in her life.
• Frequent use of narcotics, even when taken for legitimate medical reasons, can cause heart muscle damage and premature death.
Tammy Wynette
(Virginia Wynette Pugh)
May 5, 1942 – April 6, 1998