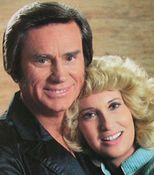 George Jones and Tammy Wynette, perhaps the most popular married country-singing couple of all time, told us a lot about  marriage and divorce in their songs. They were married for only seven years, but they wrote and sang together while they were married and for twenty years after they were divorced. Many popular country hits that you still hear today were written and performed by them. She was married five times and he was married four times, and they both had an incredible amount of medical and emotional problems.

Tammy Wynette died at age 55. She had suffered a childhood of extreme poverty; her father died of a brain tumor when she was nine months old, and she was brought up by an aunt who was only five years older than her in a home that had neither running water nor indoor toilets. Wynette had at least 26 major surgeries, including removal of her appendix, uterus, gall bladder, and nodules on her vocal cords. She then had to have additional surgeries to remove the scars caused by these surgeries. She developed chronic bile duct disease that required several hospitalizations from 1970 until her death in April 1998. She was hospitalized half of the time she was married to George Jones. At age 44, she had to be hospitalized for addiction to pain medicines and at age 51, she was hospitalized in a coma caused by a bile duct infection that required extensive abdominal surgery. She eventually died at age 55 while sleeping on her couch, and her doctor said she died of a blood clot in her lung, but the autopsy reported that she died of an irregular heartbeat.

George Jones died at age 81, presumably from lungs that were damaged by tobacco to send him into heart failure after a life marked by alcoholism, abuse of amphetamines and cocaine, depression, drunk driving accidents, and hospitalizations for paranoia. He was born in rural Texas to an alcoholic father who abused his wife and children. In the middle of the night his father would come home drunk with his drinking buddies and force George Jones to sing for them. Jones left home at age 16 to sing on a local radio station. At age 38, he married Tammy Wynette. One year later, shortly after the birth of their only child, he had to be put into a strait jacket in a padded cell for ten days for bizarre behavior while he was drunk.

The couple wrote and sang songs about their incredibly hostile relationship and reconciliations and continued to do so for 20 years after they were divorced. In 1980, they recorded the album Together Again and scored a hit with “Two Story House”. They even toured together in the 1990s. In 2003, a survey of country music writers, producers and stars recognized Wynette’s “Stand by Your Man” as the top country song of all time.

In “Golden Ring,” they talk about love above wealth

They sing about their marriage problems

They sing about staying married

What you get when you marry me

Tammy talks about the trials of her marriage to George

Their daughter tries to save their marriage

The heartbreak of divorce