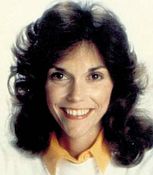 Karen Carpenter and her brother Richard sang together to form “The Carpenters”, one of the leading singing groups in the 1970s. When she died of heart failure at age 32, she made the world painfully aware of a disease called anorexia nervosa.

Dieting by Age 16
Karen was born in 1950 in New Haven, Connecticut and moved with her family to Los Angeles, California. By age 15, she and her brother had already recorded songs and the attention they received made her acutely self-conscious about her weight. She was 5’4″ tall and weighed 145 pounds. At age 16, she tried the Stillman Diet and lost 25 pounds by severely restricting fatty food and drinking eight glasses of water a day.

Her brother wrote and sang most of the songs while Karen sang and played the drums. The Carpenters signed their first recording contract when she was 19, and their recordings, personal appearances and TV shows made them famous. She was an accomplished drummer, but drummers are usually in the back of the stage to avoid drowning out the singers. She eventually stopped drumming so her outstanding voice could be heard better up front and closer to the microphone.

Something was Wrong
In those years, you could tell that something was wrong because the Carpenters frequently cancelled appearances. She appeared unhealthfully thin, weighing only 90 pounds when she was 25. Richard appeared to be forgetful, and it was later found that he was addicted to Quaaludes. In 1978, the Carpenters stopped touring and in 1979 Richard went into treatment to cure his dependency on this drug.

Quaaludes are no longer available in the United States, but they were heavily prescribed in the 1970’s to help people fall sleep, and to relax tight or sore muscles. They relaxed a person by lowering blood pressure and slowing heart and breathing rates. They were among the most abused drugs in America in the 1970s because they increased sexual arousal. However, they also caused loss of feeling in the fingers and toes. When taken in large doses they caused slurred speech, headaches and eye pain, and could even cause a person to stop breathing.

A Sad, Short Life
She lived with her parents until she was 26, and dated many famous men such as Steve Martin and Alan Osmond. At age 30, she married a real estate developer named Thomas James Burris. She became furious with Burris because she desperately wanted to have children and he did not tell her that he had had a vasectomy, so they divorced after only 14 months of marriage.

She required constant treatment from psychiatrists for her anorexia, but was so obsessed with losing weight that, on her own, she took thyroid and laxative pills. Being anorexic causes horrendous loss of bone and irregular heart beats. Taking thyroid pills when your thyroid is normal causes both of these side effects, even when you are not anorexic. Taking laxatives can cause harmful loss of fluids and keep the body from absorbing vital nutrients. When she was 32, Karen had lost so much fluid that she was dizzy and unable to function, and had to be hospitalized to be given fluid through her veins. After she left the hospital, she returned to California and soon afterwards, at her parents’ home, her heart failed and she died.

The autopsy reported that she died of “emetine cardiotoxicity”. That means that she died from an irregular heart beat caused by syrup of ipecac, readily available over-the-counter, to make herself vomit. However we do not know if this is true because no ipecac bottles were found in her apartment and there were no reports of her vomiting. She had a history of having taken thyroid pills that certainly can damage the heart to make it beat irregularly and laxatives that can cause severe dehydration that also interferes with the heart’s ability to pump blood through the body.

Anorexia Nervosa
Anorexia usually starts in the teens and is far more common in women than men. It can cause the bones to break with the slightest pressure, kidney failure, irregular heartbeats and sudden death.

Nobody knows the cause of anorexia, but it is associated with jobs and recreational activities that require thinness such as modeling, ballet, and gymnastics. It often occurs in people who are compulsive and have to do things very well and at a high level. It can be associated with stressful events, such as divorce, moving to a new town or school, or losing a loved one. There may be a family history of anorexia.

People with anorexia usually have incredibly strong denial that they have a very serious and life-threatening disease. People who suffer from anorexia
• think they are overweight when they are often very thin,
• make everything else in their lives secondary to losing weight,
• severely restrict how much they eat,
• spend a tremendous amount of time exercising, and
• often vomit and use laxatives and diuretics.

Treatment for Eating Disorders
Since doctors do not know what really causes anorexia, treatment often takes years and may continue for the entire life of an affected person. Any person once diagnosed with anorexia has to be aware that it can recur any time in the future. A dietitian may try to teach anorectics how to eat, a psychiatrist or counselor will try to help them through stressful situations, and a doctor may prescribe drugs to help control emotions. However, if an anorectic’s weight drops precipitously, he or she must be controlled in a hospital under very strict medical supervision. Anorexia is a very serious disease that usually exceeds the control of the patient.