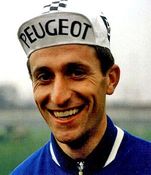 This year’s Tour de France has seen the worst heat wave ever, with several of the racers dropping out due to heat stroke (Washington Post, July 23, 2022). Everybody should know the signs and symptoms of heat stroke.

On July 13, 1967, 29-year-old cyclist Tom Simpson died from heat stroke during that year’s Tour de France. At the time he was the best British bicycle racer and leader of the British team in the Tour. At the bottom of Mont Ventoux he drank Coca Cola with brandy. His bloodstream was already full of amphetamines. He was climbing up a 14 percent mountain grade.

He fell off his bike, got back on it, rode 500 yards more and started to wobble from side to side. Three spectators grabbed his bike and lowered him to the ground, but he was already unconscious. He was given mouth-to-mouth resuscitation and oxygen. He was air lifted to a hospital in Avignon, but he was dead before he arrived.  Two empty vials of methamphetamine were found in the rear pocket of his racing jersey.

The Drive to Win
Simpson always had a lot to prove. The son of a coal miner, he grew up very poor. He felt he was too short, at 5’6″. He began cycling at age twelve and became one of most successful professional British bicycle racers. He won a bronze medal for track cycling at the 1956 Summer Olympics and a silver at the 1958 Commonwealth Games. In 1962, he was the first British rider to wear the yellow jersey in the Tour de France before eventually finishing sixth.

Earlier in 1967, Simpson won the week-long Paris-Nice race, with his young protege on the Peugeot team, Eddy Merckx, perhaps the most dominant bicycle racer ever, close behind. In the Vuelta Tour of Spain, he won two stages and then had to be forcibly dragged from his bike by his Peugeot manager, Gaston Plaud, after he lost control of his bike on the ascent of Port d’Envalira in the Pyrenees while leading by 10 minutes. Three days before his death, he was advised to drop out of the Tour de France because he was vomiting and had diarrhea. He refused, probably because he always wanted to ride as hard as he could and he had dropped out of the two previous Tour de France races.

Nobody Should Die from Heat Stroke
The most common cause of death during hot weather sports is heat stroke, in which the body temperature rises so high that it cooks the brain like an egg in a frying pan (Medicine and Science in Sports and Exercise, July 2008). Most cases of heat stroke occur during a sudden increase in the intensity of exercise, such as the finishing sprint of a long distance cycling or running race, a sprint up a hill or an intense run down the playing field.

During exercise, only 20 percent of your energy is used to drive your muscles, and almost 80 percent is lost as heat.  The harder you exercise, the more heat your muscles produce. To get rid of the extra heat, your heart has to pump extra blood from your hot muscles to your skin where you sweat, and the evaporating sweat helps to cool your skin and dissipate the heat. If your heart cannot pump enough blood to both your hot muscles and your skin, your temperature rises uncontrollably.  The people most likely to suffer heat stroke are those who have arteriosclerosis, are overweight or are in poor shape.

Nobody should ever die of heat stroke because your body sends you plenty of warning signals as your temperature rises. Still, hundreds of athletes and exercisers have died of heat stroke since Simpson’s death, most notably Korey Damont Stringer, an All-American college football player and pro-league offensive tackle who died from a heat stroke during a Minnesota-Vikings’ training-camp workout in 2001. More than 30 players have died during NCAA college football workouts in the last 20 years. The Centers for Disease Control (CDC) reports that from 2004-2018, an average of 702 heat-related deaths per year occurred in the U.S., and that “heat illness during practice or competition is a leading cause of death and disability among high school athletes in the U.S.”

As your temperature rises further, the air that you breathe feels like it’s coming from a furnace and no matter how rapidly and deeply you try to breathe, you can’t take in enough air. When you exercise intensely, you can become very short of breath, but the air you breathe will not burn your lungs. Burning in your lungs, not relieved by slowing down, signals impending heat stroke.

When you feel that the air is so hot that it burns your lungs, stop exercising. This sign means that your heart cannot pump enough blood from your exercising muscles to your skin so heat is accumulating rapidly and your temperature is rising rapidly. Your temperature is now over 104 and continuing to exercise will raise your body temperature even further and it will start to cook your brain.

Your head will start to hurt, you’ll hear a ringing in your ears, you may feel dizzy, you may have difficulty seeing and then you will end up unconscious. Your temperature is now over 106 and your brain is being cooked.

Why Amphetamines Increase Risk of Heat Stroke
Amphetamines and other stimulants may increase risk for heat stroke by preventing your brain from recognizing that you are exhausted (Temperature (Austin), 2014;1(3):242-247).  These researchers showed that in  rats,  amphetamines increased the maximum amount of oxygen taken in, time to exhaustion, and body temperature.

In 1965, I almost died from heat stroke at the finish line in a local running race in Arlington, Virginia. and I still hear from people who were there when I collapsed. I had taken an amphetamine pill before the race, and I am still embarrassed by the stupidity that I showed when I ignored all the warning signs as my temperature continued to climb. That was the first and only time I tried an amphetamine or any other performance-enhancing drug.

How to Treat a Heat Stroke Victim
When someone passes out during hot weather exercise, get medical help immediately. The most effective treatment is to place the victim in a cooling bath (J Athl Train, 2009;44(1):84-93), but a heart attack can also cause a person to pass out and a heart attack victim should not be cooled with cold water.

If the cause is heat stroke, any delay in cooling can kill the person. If possible, carry the victim into the shade and place them on their back with the head down and feet up so blood can circulate to the brain. Cool the person by pouring on any liquids you can find or by spraying them with a hose. As the body temperature goes down, the person may wake up and talk to you and act as if nothing has happened, but their temperature can rise again.  They may go into convulsions or pass out again, so the victim must be watched for several hours afterward.

Dehydration Increases Risk for Heat Stroke
You won’t feel thirsty during exercise until you have lost between two and four pints of fluid, or two to four pounds (“A pint’s a pound the world around”). Thirst is a very late sign of dehydration. You sweat during exercise, and since your sweat contains much less salt than your blood does, you lose far more water than salt during exercise. As blood salt levels rise higher and higher, they trip off special osmoreceptors in your brain to tell you that you are thirsty. Since it takes a long time for blood salt levels to rise high enough to tell you that you are thirsty, you will be severely dehydrated long before you feel thirst.

Hyponatremia Can Also Kill
It is possible to drink too much fluid, but this almost never occurs in trained athletes. It is usually seen in novice racers who spend too much time drinking fluids and too little effort maintaining their pace. Hyponatremia is low blood sodium that can be caused by drinking too much fluid, not by losing excessive amounts of salt in sweat or by the stress of exercising. The extra fluid expands blood volume and dilutes blood salt levels. This causes blood salt levels to drop too low, while brain salt levels remain normal. Fluid moves from an area of low salt concentration into areas with high salt levels, so fluid moves from the bloodstream into the brain, causing brain swelling. Since the brain is enclosed in the skull, which is a tight box, the brain expands and has nowhere to go, so it is squashed to cause headache, nausea, blurred vision, and eventually death.

Simpson took performance-enhancing drugs at a time when no doping controls existed. In spite of this, he is still admired for his character, determination and will to win. A memorial by the roadside where he died is a point of pilgrimage for cyclists climbing Mont Ventoux.

Lessons from Tom Simpson’s Death
Nobody should ever die from heat stroke. You get plenty of warning signs. On a hot day, stop exercising when you feel significant discomfort. When you feel the following symptoms, your temperature may be already too high and it may be too late:
• you feel burning in your muscles or skin that doesn’t feel better when you slow down
• the air you breathe feeling like it is coming from a furnace
• you have signs of nerve damage such as blurred vision, ringing in your ears,
• you have circulation problems such as severe shortness of breath, dizziness, headache, feeling like you are going to faint
• you stop sweating like you normally should
Never take amphetamines when you exercise because they can kill you.