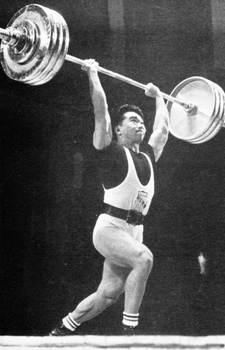 Tommy Kono was probably the greatest Olympic weightlifter of all time.   Between 1952 to 1960, he won two Olympic gold medals and one silver Olympic medal.   His Olympic medals were in three different weight classes: gold in lightweight, gold in light heavyweight and silver in middleweight.
• In 1952, he set two Olympic records and one world record in the lightweight (148) division.
• In 1956, he set four Olympic records and two world records in the light heavyweight (181) division and lifted a world-record 385 pounds, more than twice his body weight of 176 pounds.
• In 1960, he set one Olympic and one world record despite a severe knee injury.
He said that he was able to compete in so many different weight classes because when he wanted to gain weight, he ate six meals a day. When he wanted to lose weight, he cut back to three meals.  Kono set 26 world records in four different weight classes, seven Olympic records and eight Pan American Games records, and won six world championships.  He also competed in body building and was named the 1954 Mr. World Champion and the Mr. Universe World Champion in 1955, 1957 and 1961.
He Did it Against All Odds
Kono competed as a Japanese-American soon after Jackie Robinson broke the baseball color barrier in 1947.  Basketball was still a white man’s sport, football teams were allowed a limited number of black athletes, and hockey had none.
He was alive only because his father had moved the family from Hiroshima several years before World War II, when the entire city was destroyed by an atomic bomb.  He was born in Sacramento CA, so he was a U.S. citizen.  He grew up in a neighborhood made up of poor Mexicans, Chinese, Japanese and Filipinos.  He later told reporters, "We knew that the white kids could go to certain swimming pools but we weren’t allowed to.”
After the Japanese bombed Pearl Harbor on December 7, 1941, over 120,000 Japanese Americans were forcibly moved away from the Pacific states to inland internment camps.  The Kono family was sent to the austere Tule Lake Relocation Center in northern California, where they were jammed into long buildings with no privacy and no running water.  His older brothers were allowed to leave the relocation center to work on jobs in the eastern states, but Tommy and his parents had to remain in Tule Lake until December 1945.

Life there was harsh but it turned out to be good for Tommy.  He suffered from asthma and the air in Sacramento caused him to wheeze and gasp for breath all the time.  He said, "I missed one-third of grammar school because of asthma and had to skip physical education classes."  However, the dry desert air of Tule Lake allowed him to breathe normally for the first time in his life.

In 1942, when he was 11 years old, he sent a postcard to enroll in a Charles Atlas bodybuilding course. The card records that he was 4' 8 1/2" tall, had a 29" chest and a 26" waist, and weighed 74 1/2  pounds. Since he didn't have the $36 enrollment fee, he was not able to take the course.   However, his friends in the camp ran a hamburger stand and were able to earn enough money to buy a York Barbell "Ten-in-One" exercise kit.  At the internment camp he started lifting light weights for one hour workouts three or four times a week.  He could lift and lower 55 pounds three times and 65 pounds once.  (Kono later trained at the York Barbell gym in York PA).

After V-J day
On August 14, 1945, the Japanese surrendered and the Kono family was allowed to return to Sacramento.  Kono was graduated from Sacramento High School, worked for the California Motor Vehicle Department, attended Sacramento Junior College and lifted weights at the Sacramento YMCA.
At age 18 in March 1948, with his head full of sugarplums, he went to the Northern California AAU weightlifting championships. He came in second, but there was only one other person in his weight class.   He told his friends about his high finish but did not tell them the number of entrants. The fire was lit. He trained hard and in December 1948, he was able to do 360-pound half knee bends, a sign of things to come.  In the 1950 Pacific Coast AAU weightlifting championships, he won with a combined lift of 780 pounds, and two weeks later came in second at the US Nationals in Philadelphia with a total lift of 760 pounds.
In September 1950 Kono flew to New York to participate in the World Championship tryouts, but his mother died the day before his competition and he was so devastated that he finished second, even though the winning lifts were way below his practice lifts.  On returning home, he was drafted into the army to fight in the Korean War.  However, his commanding officer  recognized his potential and made him an instructor at the base gym at Fort Mason. In January 1952, he set the unofficial US record during a YMCA tournament in San Jose.  In May, he set three US and one world's record and the next month made the U.S. Olympic team.

Olympic Champion
At the Olympics in July 1952 in Helsinki, Finland, he suffered food poisoning the night before his match, but won the gold medal with a world record in the snatch.  He wore eyeglasses and street shoes. He really loved being on the team, saying "The whole U.S. team was a mixed up group . . . I had Black, Polish, Chinese, Japanese, Swedish and Macedonian teammates. When they said U.S. team it was a real mixture, a real melting pot."  What is really amazing is that he trained by lifting for an hour and half, three to four times a week. Today competitive lifters spend more than five times that amount of time.
He was dominant. In October 1958, he won his eighth-consecutive world championship.  In June 1960 at the Rome Olympics, he was defeated for the first time in eight years, winning a silver medal. By that time, most athletes from behind the iron curtain were taking anabolic steroids.  A knee injury kept Kono from qualifying for the 1964 Tokyo Olympics. He was terribly disappointed, "because competing in Japan would have had special meaning due to my heritage."   June 12, 1965 was his last competition, when he finished in third place at the US Senior Nationals.

In 1964 he opened a gym at Wailuku, Maui. In 1965 he became coach of the Mexican national weightlifting team.  He coached the West German Olympic weightlifting team until 1972, was head coach of the US Olympic weightlifting team from 1972 to 1976 and head coach of the US women's Olympic team from 1987 to 1990.  He helped to design weightlifting shoes and training equipment.  He worked as a physical fitness specialist for the City of Honolulu for more than 20 years.  He wrote books and articles and traveled widely, lecturing and sharing his expertise to encourage young athletes.  He was voted into the United States Olympic Hall of Fame and the International Weightlifting Federation Hall of Fame.
On April 24, 2016, at age 85, he died in Honolulu of liver failure from cirrhosis that caused his brain to swell.
Liver Failure and Cirrhosis
Cirrhosis can be caused by:
• diabetes or metabolic syndrome
• alcohol
• viral hepatitis (hepatitis B and C)
• other infections such as schistosomiasis
• fat accumulating in the liver (nonalcoholic fatty liver disease)
• excess iron
• excess copper (Wilson's disease)
• cystic fibrosis
• abnormal bile ducts (biliary atresia)
• inherited sugar disorders (galactosemia or glycogen storage disease)
• genetic digestive disorder (Alagille syndrome)
• autoimmune hepatitis
• primary biliary cirrhosis
• primary sclerosing cholangitis
• certain drugs such as methotrexate.
I do not know the cause of Kono's liver damage. He said he had hip replacement surgery in 1996.  A blood transfusion could transmit a virus but by that time, blood for transfusions was screened for both hepatitis B and C.  Anabolic steroids that many weightlifters took since the early 1960s can cause liver damage, but we have no evidence that Kono ever took steroids.  He certainly was not an alcoholic and was not known to take drugs or medications.  The most common cause of liver damage in America is a fatty liver caused by high-blood sugar levels that are converted to triglycerides and stored in the liver, but he was never overweight and was unlikely to have had diabetes.

What You Can Learn from Tommy Kono's Story
If you are ever told that you have abnormal liver tests, you need an immediate evaluation for the cause.  In North America, the most common cause of abnormal liver tests is a fatty liver caused by overweight and is seen in people with metabolic syndrome.  In that case, you need to lose weight with a dramatic change in lifestyle.  No calorie-restriction diets or drugs have ever been shown to cause permanent weight loss.  I recommend "intermittent fasting."
Tommy Kono lived a long and productive life that was devoted to his sport and to helping others follow his passion.  May he rest in peace.