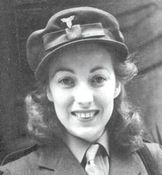 If you were alive during World War II, you probably remember Vera Lynn as the “Forces’ Sweetheart” of Great Britain’s resistance to Nazi Germany — but you don’t have to be that old to recognize her songs. Throughout the war she sang on the radio and at the front lines for British troops in Egypt, India and Burma,
• “We’ll Meet Again”
• “The White Cliffs of Dover”
• “A Nightingale Sang in Berkeley Square”
• “Auf Wiederseh’n”
• “There’ll Always Be an England”
Twenty-five years after the end of the war, she was awarded the OBE (Officer of the Order of the British Empire) and then the DBE (Dame Commander of the Order of the British Empire). She actively continued to give concerts and release recordings through her hundredth birthday, and she died last week of “old age” at 103.

From Humble Beginnings
Vera Lynn was born near London during World War I, to a plumber and a dressmaker. At age two, she was hospitalized for three months and nearly died from diphtheria. She took singing lessons and gave her first singing performance at age seven. At 14, she quit formal schooling to work in a factory, but quickly found out that she could earn more money singing in clubs. By age 18, she sang regularly on the radio and with a dance band, and at age 19 recorded her first record. By 22, she had sold more than a million records and bought her parents a house and herself a new car. At age 24, she married Harry Lewis, a clarinetist and saxophonist in the band she sang with, and they had one child. He later quit playing in the orchestra to manage her publicity and musical engagements; he died in 1998 after 57 years of marriage.

It was World War II that made Vera Lynn famous. In 1941, she started her own radio show, “Sincerely Yours,” on the British Broadcasting Company, and sang songs requested by the soldiers. She toured with the Entertainments National Service Association (ENSA, the British equivalent of the USO) and sang at the front lines in tropical Burma, traveling in a lorry with a small out-of-tune piano in the back, and watching “the boys as they were brought into the casualty tents.” She also visited wounded soldiers in hospitals and appeared in several movies.

After World War II
After the war she toured regularly, came out with several top records and continued her radio shows into her fifties. At age 35, she had three of the top 12 records in the UK and sang regularly on Tallulah Bankhead’s radio program in the United States. Her “Auf Wiederseh’n, Sweetheart” became the first recording by a British singer to be the top recording in the United States. In 1964, her “We’ll Meet Again” was used in the closing scene of the classic movie, “Dr. Strangelove.”  In 1982, at age 67, she commemorated the end of the Falkland’s War with “I Love This Land,” and in 2009, at the age of 92, she was the oldest living singer to release a top UK recording “We’ll Meet Again.” At age 100, her newly-released album of old recorded songs made her the 3rd best-selling female artist of the year in the UK. A age 101, she was nominated for the 2018 Classic Brit Awards for Female Artist of the Year and Album of the Year. This year Queen Elizabeth II spoke at the 75th Anniversary of VE Day (Victory-in-Europe) and quoted from Lynn’s “We’ll Meet Again.”

What Causes Death in a Healthy Centenarian?
People who live to be 100 almost always have chosen their parents wisely and have lived fairly healthful lifestyles. Even if you have long-living parents, you can still shorten your life considerably by breaking the rules for healthful living. To maximize your chances of living to 100 or beyond, follow these rules:

• Have a regular exercise program  or have a job that requires physical exercise
• Follow a healthful diet and maintain a healthful weight; eat lots of vegetables, fruits, whole grains, beans, seeds and nuts. Avoid or restrict mammal meat or processed meats , sugar-added foods,  refined carbohydrates, and fried foods.
• Don’t smoke or expose yourself to second-hand smoke
• Avoid or restrict alcohol
When people die of “old age,” it is usually because they have become so inactive that their hearts get too weak to pump enough blood to the brain. See my report on How Inactivity Can Cause Heart Failure.