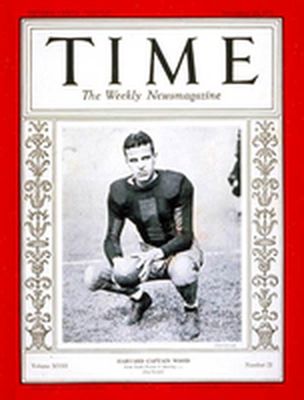 Barry Wood was arguably the most gifted athlete ever to become one of the most famous physicians in the world. He won 10 varsity letters from 1929 to 1931 as one of Harvard’s greatest athletes:
• He was an All-American football quarterback, drop kicker and defensive back for Harvard during the 1929–1931 seasons and was elected to the College Football Hall of Fame in 1980.
• He was the last Harvard player to be named All-American in football at the time when Harvard football teams played the University of Texas, University of Michigan and other schools whose teams were among the best in the country.
• He was such an outstanding football player that his picture was on the cover of Time Magazine on November 23, 1931, after Harvard defeated Army 14-13. The accompanying article said, “Even the Boston and Cambridge policemen root for him.”
• He was Harvard’s best hockey player as center on the hockey team, a consistent 300 hitter, first baseman and shortstop on the baseball team, and a nationally-ranked tennis player who played with Bill Tilden on the American Davis Cup tennis team while still an undergraduate.

His classmates loved him and named him captain of both the football and hockey teams, class president as a freshman, student council president, and First Marshal of his senior class. He was far more than just an athlete; he was graduated, summa cum laude, at the top of his class, and was elected to the Phi Beta Kappa honor society. While still a Harvard undergraduate, he published breakthrough scientific papers on how the body uses white blood cells to kill invading bacteria. Throughout his career, he continued to publish and was considered to be one of the world’s leading authorities on white blood cells.

His Career in Medicine and Young Death
Wood turned down several professional sports offers and went to Johns Hopkins Medical School, where he received his medical degree in 1936. He then became a National Research Council Fellow in bacteriology at Harvard, but returned to Hopkins in 1940 as a full-time faculty member. He wrote more than 125 papers and several books. He was one of the first people to publish on the amazing breakthrough of the use of penicillin to treat infections, and made breakthroughs in:
• how the body recovers from pneumonia
• how white blood cells eat invading bacteria
• what causes a fever
• a body hormone called interleukin-1.

In 1942, at age 32, he became head of the Department of Medicine at Washington University in St. Louis and physician-in-charge at Barnes Hospital. He returned to Johns Hopkins in 1955 as vice president of the university and hospital, and professor of microbiology. In 1959, he became director of the department of microbiology, and remained in that post until his death in 1971.

From 1963 to 1965, I was a research fellow in immunology at Johns Hopkins, where I met Wood and went to his lectures. I remember him as 6′, 2″ tall, still athletic, weighing less than 170 pounds, never being overweight and never smoking. In 1969 at age 59, he suffered a massive heart attack, was incapacitated and spent many months recovering. In 1970, his wife died. On March 9, 1971, he flew to Boston to attend a dinner honoring Harvard president Nathan Pusey, and he died there of another massive heart attack.

He Had Done Everything Right
How could a healthy man with a healthful lifestyle die of a heart attack at the very young age of 60? I was at Johns Hopkins in the early 1960s where I often went to hear him speak. It appeared that his lifestyle was beyond reproach; he:
• had exercised vigorously all his life,
• was always slender,
• was never overweight,
• had never smoked,
• never took more than an occasional drink, and
• did not work with toxic substances.
However, his father had died of a heart attack at an even younger age, so Wood probably had a genetic condition that increased his risk for a heart attack. We have no way to know the cause of Wood’s heart attack, but I do know that since 1971, scientists have made many breakthroughs in learning the causes of heart attacks and how to prevent and treat them.

What We Have Learned Since 1971
Today we have a better understanding of the risk factors for heart attacks, and many more effective treatments:

• Inflammation: We now know that heart attacks are linked to chronic inflammation (an overactive immune system) and clots. Your immune system is supposed to be good for you because it makes cells and proteins that kill invading germs. However, if your immune system stays active all the time, it can use these same cells and proteins to punch holes in arteries that eventually cause plaques to form on the inner linings of arteries, which can break off and bleed, leading to a heart attack as described above. In 1971 we had no dependable drugs to reduce inflammation, but today we have statins which reduce both cholesterol and inflammation, and several other drugs to block inflammation. We also have a better understanding of anti-inflammatory lifestyle habits that help to prevent heart attacks.

• High LDL cholesterol and small lipid particle size: If you have high blood cholesterol,  it’s best to try to lower it with a healthful diet and exercise. If you need medication, your doctor will probably recommend statins.  We also now have selective drugs to prevent you from absorbing cholesterol and PCSK9 inhibitors such as evolocumab, which are monoclonal antibodies that help to prevent your liver from making cholesterol (N Engl J Med, August 20, 2020;383:775-776).

• Diabetes (a major cause of heart attacks): The primary treatment for diabetes or pre-diabetes is lifestyle changes  that include just about everything that helps to reduce inflammation: an anti-inflammatory diet (loaded with plants and restricting mammal meat, sugar-added foods and fried foods, and all drinks with sugar), exercise, and avoidance of smoke and alcohol.

• Clotting: Anticoagulants such as heparin or warfarin reduce clotting. Antiplatelet drugs, such as aspirin or clopidogrel, help to prevent blood cells called platelets from clumping together to form clots. Caution: Be aware that all of these drugs will cause bleeding with the slightest trauma.

• A high resting heart rate (over 70 beats per minute): This is a sign of a weak heart that can be treated with an anti-inflammatory lifestyle, medication, and a program of supervised and controlled exercise

If you have any of these major risk factors or a family history of heart attacks, check with your doctor and learn how to improve your lifestyle to help prevent heart attacks.