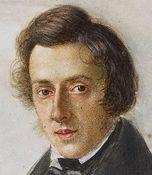 Frederic Chopin was one of the greatest composers of solo piano music and a gifted pianist whose incredible techniques are still copied by concert pianists. He had a disease that made him sick from early childhood on, and he died at the tragically young age of 39. He was diagnosed with tuberculosis, but his autopsy showed none of the signs of this well-known disease.  Instead, he probably suffered from cystic fibrosis, a genetic condition that was not even described until 1938, 90 years after his death.

A Child Prodigy
Chopin was born on March 1, 1810 in Poland to a French father and a Polish mother. He was a child prodigy nurtured by parents who played music all the time. At age three he was able to repeat melodies his mother and sister played on the piano. He started formal piano lessons at age five. At seven, he wrote the Polonaises in G-minor and B-major. At eight, he gave his first public performance and the newspapers rightfully called him "the miraculous child” and "a second Mozart”. At age 13, he studied in the Warsaw Lyceum, where his father worked. He also showed talent as a writer, artist and actor. At age 16, he became a student at the University of Warsaw where he continued to compose brilliant new piano solos and give concerts. He was asked to play for Tsar Alexander I, who gave Chopin a diamond ring.

When Chopin was 17, his youngest sister died. The family moved next to the university to run a boarding house for male students. When he was 20, Russian conquerors crushed an uprising of the Polish people, and he left Poland permanently primarily because of this. He went to Paris where he made a lot of money teaching piano to rich students from all over Europe. Chopin always considered himself to be Polish and never French, in spite of his father's ancestry.

Troubled Affair with George Sand
In 1836, Chopin met the French author George Sand (real name, Aurore Dupin) at a party. She was so aggressive that he didn't like her. Two years later, Sand wrote a letter telling Chopin that she was abandoning a current affair to begin a new one with him. She was six years older than Chopin and had had many lovers before him. The two left immediately for Majorca, apparently to get away from the threats of one of Sand's previous lovers.  In December 1838, Chopin complained about his bad health and the incompetence of the doctors in Majorca: "Three doctors have visited me . . . The first said I was dead; the second said I was dying; and the third said I was about to die." He wrote several new piano pieces, but the bad weather appeared to have made him cough all the time, so Sand decided that they should leave the island. In 1842 Chopin and Sand moved to the Square d'Orléans in Paris, living in separate buildings next to each other.

In 1845 Chopin developed temporal lobe epilepsy. The temporal lobes control emotions and short-term memory. During a temporal lobe seizure, a person may remain conscious and feel euphoria, fear, or panic attacks. He may make repetitive movements and be unable to respond to other people. As Chopin's health worsened, Sand became less of a lover and more of a nurse. She referred to him as her "third child." In 1847 Sand published her novel Lucrezia Floriani, a story about a rich actress and a prince in weak health. It really was the story of the worsening relations between Sand and Chopin. Chopin knew that and ended their ten-year relationship.

New Romance, Failing Health
Chopin left Paris for London in spring of 1848 because of the French Revolution. One of his pupils, Jane Stirling, made all the arrangements and paid for his move. He performed in concerts and receptions, and was in great demand as a teacher. Stirling arranged for him to visit her home in Scotland. She wanted to be his permanent lover, but Chopin refused, saying that he was "closer to the grave than the nuptial bed." While staying in Edinburgh, Chopin wrote out his last will and testament. He weighed less than 99 pounds. He returned to Paris, where he died on October 17, 1849. His death certificate stated incorrectly that his death was caused by tuberculosis.

What Killed Frederic Chopin?
The disease that probably killed Frederic Chopin was first described on May 5, 1938, 89 years after his death, by Dorothy Andersen of Columbia University at a meeting of the American Pediatric Society. Here are his symptoms:

• Frailty. He was incredibly frail all his life. At his tallest, he was 5 foot 6 inches and never weighed much more than 100 pounds. His arms looked like toothpicks, he had no muscle development whatever, he had to travel in horse-drawn carriages and never rode on horseback. He was never strong enough to be able to play a true Forte on the piano. At age 18, after giving a concert in an inn in Sulechow, he had to be carried from the stage. In 1838, when he was 28, his mistress George Sand wrote that she had to stop having sex with him because she was afraid it might kill him. He was so incapacitated in the last four years of his life that he played the piano while leaning backwards on a couch, and required a servant to carry him upstairs.

• Coughing and Shortness of Breath. Chopin had a chronic cough from early childhood and because of that, he was diagnosed as having tuberculosis. From age 15 onward, he coughed all the time. His cough was so bad in the winter that he used to leave Paris for long periods to get away from the dry cold air. He coughed up blood regularly for the last 10 years of his life. He was barrel-chested, showing that he had severe obstruction to breathing air out of his lungs. In 1838, during his visit to Majorca, he coughed so much that his landlord was convinced that he had tuberculosis and insisted that he leave the rented home and pay for disinfecting it. At that time, this meant burning all of the furniture and replacing it.

• Infertility. In spite of his many sexual liaisons, he never was known to have made a woman pregnant.

• Fat Intolerance. At age 15 he lost a tremendous amount of weight while suffering a respiratory infection. His doctor prescribed a diet of mostly bread and sugared foods and he followed a high carbohydrate, low-fat diet for the rest of his life. George Sand said that in Majorca, where they had only pork to eat, Chopin developed terrible stomach cramps and diarrhea. In the last years of his life Chopin had constant diarrhea.

* Excessive Salt Loss. Chopin could not tolerate hot weather because he would sweat profusely and any exercise would exhaust him. He had to change and wash his clothes frequently because they would become soaked with his high-salt sweat.

• Family History. Two of Chopin's three sisters had the same symptoms as Chopin: coughing all the time and chronic diarrhea. One died at 14, the other at 47.

The Autopsy
A noted pathologist named Cruveilhier performed Chopin's autopsy and wrote that Chopin's illness "is a disease I have never encountered before". He had an enlarged heart, chronic lung damage, and no tuberculous holes in his lungs.

Diagnosis: Cystic Fibrosis
Now we know that Chopin probably died of cystic fibrosis, a genetic disease characterized by the accumulation of thick, sticky mucus that:
• blocks the lungs to cause coughing, shortness of breath, chronic infections and permanent lung damage
• blocks the pancreas to damage it and prevent it from making enzymes that break down food, particularly fat, so that it can be absorbed into the bloodstream. Food that is not absorbed passes out undigested to cause diarrhea, malnutrition, poor growth, and loss of weight. Damage to the pancreas also causes it to stop making insulin, leading to diabetes.
• blocks the sperm tubes to make a man infertile
Since people with cystic fibrosis lose an abnormal amount of salt, anything that accelerates salt loss (such as exercise, hot weather or diarrhea) causes extreme exhaustion.  The screening for cystic fibrosis is a test of sweat for abnormally high salt content.

Before antibiotics, virtually all children with two copies of the most common CF gene died in early childhood. However, there are other less common variants of the defective gene that can result in less severe symptoms, so some people with cystic fibrosis could survive longer without antibiotic treatment. This would explain how Chopin could have lived as long as he did with cystic fibrosis in the 1800's. No other diagnosis fits all of his symptoms.

Chopin's heart is preserved in a church in Warsaw, so DNA tests could be performed that would show whether he had cystic fibrosis. So far, the living descendants of the Chopin family have refused to permit these tests.

Progress Toward a Cure for Cystic Fibrosis
Diana's grandson Mac was diagnosed with cystic fibrosis at birth in September 2000.  Every day of his life he has done therapy with special machines to try to clear thick mucus from his lungs, and taken enzymes before each meal to help him absorb food.  Any type of infection can be a disaster for a person with cystic fibrosis, so his family has had to take extra precautions with his health. I have been listening to his lungs for 18 years, and he has always had excess mucous blocking his lungs.
At age 17, he was accepted into a trial for an experimental drug, where he did not know whether he was given a placebo or the test drug.  During the course of the study, his lungs remained full of mucus.  At the end of the trial, all participants were placed on the test drug.  Within just a few weeks, he started to gain weight and muscle mass.  When I listened to his lungs, they were completely clear — for the first time in his life.
On May 30, 2019, Vertex Pharmaceuticals announced that it will pursue FDA approval for the drugs tested in the trial: triple-combination therapy VX-445 (elexacaftor) plus tezacaftor/ivacaftor (Symdeko®).  The company announced the results of the trial Mac participated in: 14.3 percentage point increase in lung function (FEV1), 63 percent reduction in pulmonary exacerbations, -41.8 mmol/L decrease in sweat chloride, and a +20.2 increase in quality of life measurement (CFQ-R).
On May 31, Mac graduated from high school with honors.  He now has every reason to hope for a long and healthful life.
Cystic fibrosis is an inherited chronic disease that affects about 30,000 people in the United States and 70,000 worldwide. To learn more about cystic fibrosis and to help the Cystic Fibrosis Foundation find a cure, visit http://www.cff.org/