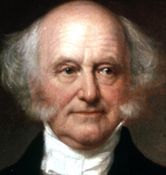 At age 51, Martin Van Buren became the first native-born president of the United States because he was born after the American Revolution.  He helped to build the modern Democratic Party and won reparations from France for properties seized during the Napoleonic Wars.
At age 40, he developed a cough and progressive shortness of breath that would be diagnosed today as “late-onset asthma,” but in those days, his physician called it “malignant catarrh.” He suffered from it for nearly 40 years, eventually dying from his disease in 1862 at age 79. At his request, no bells rang at his funeral.  Today we still have no cure for late-onset asthma, but exciting research on the microbiome (the bacteria that live in our lungs, skin and intestines) may someday offer a cure.
He Was Not Re-elected
Van Buren was born in 1782 and served as the eighth president of the United States from 1837-1841.  At age 55, he ran for re-election as president, but was overwhelmed by the powerful heroic image of his opponent, General William Henry Harrison.  Van Buren was five feet tall, asthmatic, weak, bald and poorly dressed, while Harrison was taller, better-looking, very athletic and a great war hero. Harrison was the famous general who defeated the British and Indians at Tippecanoe. You may have heard Harrison’s campaign slogan: “Tippecanoe and Tyler too”. The “Tyler too” referred to his vice president, John Tyler, who was to become the tenth president of the United States when Harrison died of pneumonia 30 days after his inauguration.  Harrison had mocked Van Buren in his campaign song:
“Old Tip, he wears a homespun suit,
He has no ruffled shirt;
But Mat he has the golden pate,
And he’s a little squirt.”
Van Buren was criticized for not clearing up the Panic of 1837, a recession brought on by his predecessor, Andrew Jackson, but modern economists praise him for establishing a central agency, the U.S. Treasury, to manage the U.S. money supply and for giving the states the right to regulate banks, which promoted the growth of new banks.
He was such a trusting person that he never locked the doors of the White House. One night a drunk came into the White House, slept all night in the living room and was not discovered until the next morning.
Treatment of Late-Onset Asthma
President Van Buren suffered and died from a condition called late-onset asthma.  Now, 157 years after his death, doctors still have not found a cause or cure for late-onset asthma and the most common treatments may actually shorten lives. Asthma that starts in childhood can often be caused by allergies to pollen and mold, and asthmatic children often outgrow the effects of their disease. However, asthma that starts in adulthood is almost never caused by allergies and almost never improves with allergy injections.
Some cases of late-onset asthma are caused by intracellular bacteria or fungi (Chest, 2002;121(6):1782-1788), but in most cases no causative germ is found.  Late onset asthma is usually treated with drugs to suppress immunity, such as prednisone, methotrexate or Imuran. These drugs help relieve suffering and make the patient feel better in the short run, but over time, they can reduce a patient’s ability to kill germs.  If Van Buren had been treated with these drugs, he might have been more comfortable than he was in the 1800’s, but he might have died at a much younger age.
Asthma attacks can be brought on by:
• Chemicals in the air at work or home (such as those in common household cleaners and industrial pollutants)
• Chemicals in cigarette smoke (tar, arsenic, cadmium, formaldehyde, chromium, etc.)
• Lung infections
• Aspirin
• Hormones released from fat tissue (obesity)
• Vigorous exercise (usually by breathing dry, cold air and not from the exercise itself)
• Allergens such as pollen, dust or mold, but allergies are a far less likely cause in late-onset asthma than in childhood asthma.
Hope for Future Treatments
Late-onset asthma may be an auto-immune disease in which a person’s own immune white blood cells and cytokine chemicals that are supposed to attack germs, suddenly turn on the host and attack the lungs.  Current research shows that bacteria that live normally in your intestines, skin and lungs may cause your own immunity to attack your own lungs (J Allergy Clin Immunol, Jan, 2015;135(1): 25–30).  Humans have more than 100 trillion bacteria living in their large intestines and trillions more living in their lungs.  Your large intestines harbor more than 1000 different species of bacteria.  New research shows that people who suffer from asthma have colon and lung bacteria that are different from those in people who do not have asthma (Allergy Asthma Clin Immunol, Dec 10, 2015;11:35).  Extensive research is going on to find out if bacteria that live in a person’s gut and lungs cause late-onset asthma.
Your immune system is supposed to protect you from infections. When you get an infection, your immune system produces white blood cells and chemicals that attack and kill germs. As soon as the infection is gone, your immune system is supposed to dampen down. However, if your immune system stays on all the time, it can attack your healthy tissue in the same way that it attacks invading germs. This is called inflammation, and it is controlled largely by the types of bacteria living in your intestines. Healthful bacteria are happy to eat the same food that you do and do not try to enter your cells and bloodstream. On the other hand, harmful bacteria are not happy with what you eat, so they try to enter your cells and bloodstream. Your immune system responds by producing large amounts of cells and chemicals that attack and kill germs. If these bacteria in your colon continuously try to enter your cells, they keep your immune system on all the time and this can cause your own cells to attack you in the same way that they try to kill germs. If they attack your lungs, you may develop late-onset asthma.
Martin Van Buren
1782 – 1862